After Munich we were off to the Neuschwanstein Castle. We arrived mid-afternoon and checked in to our B&B in the village with a view – and I mean a view! Take a look at this view from our deck! 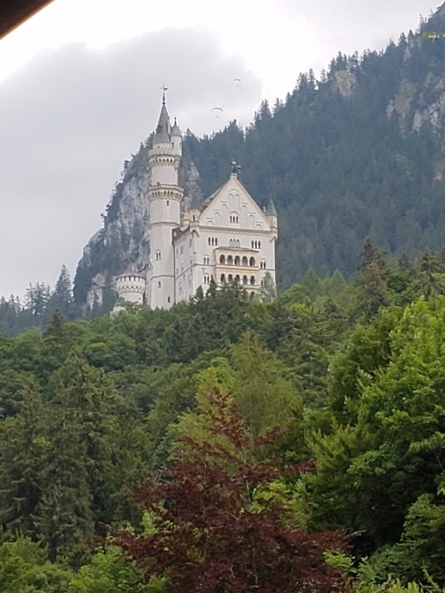 Now, this room was up a flight of about 10 steps. We’ve had this before in travels, and lugged our bags up and down the steps with varying levels of success. This time we decided to ferry what we needed back and forth from the car in our backpacks. This was a much better plan. We walked around the village which is full of shops, restaurants, and B&Bs for the afternoon and had dinner at our B&B.

The View was Worth the Steps!

The View was Worth the Steps!

During our walk we walked to the lake where they found “Mad King Ludwig” dead. It is still a mystery today as to whether or not he was driven to suicide when declared insane and forced to stop building his dream castle, the Neuschwanstein, or if he was killed.

The next morning we woke up early and walked uphill (another hill!) to Hohenschwangau Castle. This is a “small” castle that King Ludwig grew up in as a prince, and dreamed of one day building his own castle – a castle fit for a fairy tale. This tour is in English and though very obviously scripted, it is quite interesting and educational. We learned a lot about the family, and Ludwig himself on this tour. This serves as the perfect introduction to a tour of the Neuschwanstein.

After our tour concluded and a stop in the gift shop we walked back into town to grab a coffee and take a break in our room. The Neuschwanstein runs on a ticketed, timed entry program that is strictly enforced. We knew the walk to the castle would take about 40 minutes, and our ticketed time was at 1:00 pm, we thought leaving at about 11:00 would give us plenty of time to get there.  Good thing we built in extra time.

The Neuschwanstein is on a hill, which means another uphill walk! Now, we could take a horse carriage, bus, or hike. Me being me means I pretty much forced us to walk up the hill. We took our time and got to the castle at about noon. We waited in the courtyard for our timed entry. At 1:00 we entered and were escorted on our group tour. 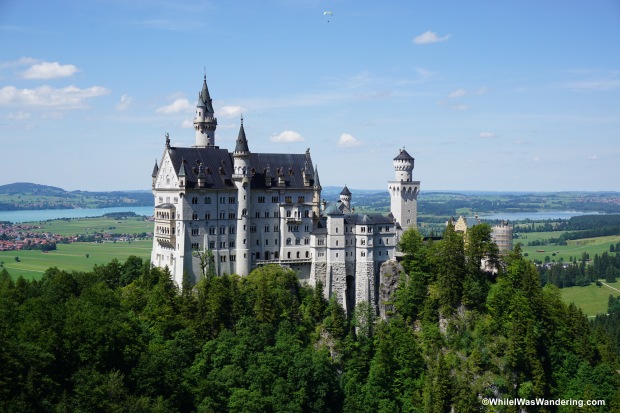 This is another scripted, but swift tour. We definitely got to see everything we could, but there was less time for questions, and a lot less background information on the family. The tour takes you through all of the finished and unfinished rooms. The castle remains unfinished to this day. In order to stop his spending the German government had King Ludwig declared insane, hence his nickname “Mad King Ludwig”, and that means Neuschwanstein was never finished – and never will be finished.

After the tour we of course visited the gift shop. Since by now it was about 2:00 we had lunch in the café – a cheesecake for my husband and chocolate cake for me – a perfect lunch!

After touring the castle you can leave, or go to Marienbrucke (Mary’s Bridge). This is another 20 minute or so walk to a bridge over a gorge that offers amazing views of the castle. We set off on the walk and got to the bridge. There is a giant screen with a counter on it which was anywhere between 370 and 400 during the time we were in line. The bridge’s capacity is 400 people. When we got on the bridge my husband went out a little of the way with me, but his fear of heights kicked in so he went to terra firma quickly. I ventured out farther to get a lot of pictures of the castle.

Why did we carry a Mickey Mouse all the way from Florida to Germany for a photo? The Neuschwanstein is one of two castles that serve as the inspiration for Disneyland’s and Walt Disney World’s castles. This was our fun way of giving a nod to the castle for its role in Disney history. As we walked up to the castle and had a chance to see the spires up close I said “it looks exactly like Disney’s castle!” My husband was quick to correct me by stating “no, Disney’s castle looks exactly like this one.” Disney pays tribute to this castle and Chenonceau, the other castle that inspired Disney’s theme park castles, in the Disney family apartments on 21 Royal Street in Disneyland. We were able to visit the apartments on a tour of Disneyland a few years ago and got our picture taken with the painting of Neuschwanstein in the apartment. Now we have been to both of Disney’s castles and their inspirations in real life!

We absolutely loved our time in this little village and would recommend staying in the village versus Fussen or Schwangau. Those towns may offer more hotel and dining options, but absolutely nothing beats the view we had in our B&B. This was the perfect way to close out the German leg of our trip. Next up Switzerland!

2 thoughts on “Three Days in a Fairy Tale – Neuschwanstein Castle”