We were both looking forward to Munich. Luckily the S-Bahn, or subway in English, had a stop directly under our hotel. We bought our tickets from the concierge and found our way to the correct platform. Navigating public transportation was one of our greatest challenges when travelling in a foreign language that neither of us understand very well. We learned it was just a matter of taking the time to read the maps, figure out directions, and making our way in the right direction — hopefully!

While I was Wandering Munich’s Marienplatz 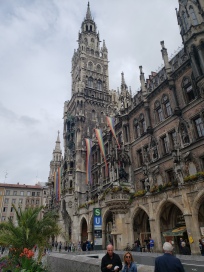 While I was Wandering Munich’s Marienplatz

After our ride we emerged in the middle of Marienplatz at about 10:45 am. This was perfect timing by accident. The glockenspiel in the square only goes off at certain times, and 11:00 am is one of those times. This is a multi-level, giant, cuckoo clock that tells a little tale of a celebration of a wedding. It was a lot of fun to watch as the story unfolds, but really difficult to photograph. As you can see above, it is very dark!

We set off on another city walk that took us to St Peters and the Viktualien Markt. This market was so interesting to walk around – it is basically a farmers market with a beer garden in the middle of it. There are food stands, cheese stands, gingerbread stands, meat stands, flower stands, and more. It is a fun little market to walk around, and you can’t miss the elaborate May Pole in the center of the market.

While I was Wandering Munich’s Asam Church

Our city walk took us to the Asam Church which is crazy. These two brothers were church designers and builders, and basically built a sample church to use a sales center that shows off all of their styles, tricks (such as fake marble — wood columns painted to look like marble are way more affordable than real marble), and skills. Walking in this church is like walking in an out of control decorator’s showplace.

By now we were getting hungry – and when you are in Munich there is really only one place to eat and drink – the Hofbräuhaus. We found a seat at the long tables and waited. And waited. And waited. Finally after a 30 minute wait the waitress came by after she went over and yelled at another table for complaining about the wait. We politely ordered our meal – cheese spread and bread, cheese spätzle (mac and cheese) for me, and a pork knuckle for my husband. Oh yeah, and beer! I tried the half lemonade half beer drink called a Radler – not too bad! This was a really good meal and experience, plus it was exciting to be in the legendary beer hall. 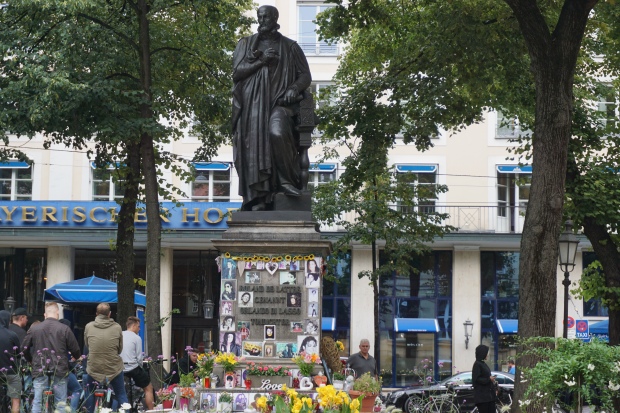 After lunch we headed to a Michael Jackson Memorial. Yes, we did this. This is a statue honoring someone else, but after Michael Jackson died his fans pretty much took over this statue outside a hotel he used to frequent on his visits to Munich. After that crazy diversion we set off to a few more churches, the Residenz, Odeonsplatz, and Hofgarten. As we made our way back to the Marienplatz we wandered by the Hofbrauhaus again and stopped in the Hard Rock Café for some souvenir shopping. 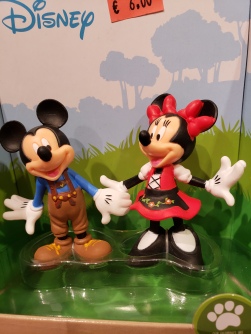 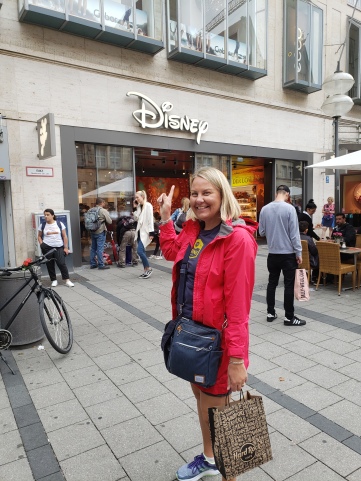 On our way back to the Marienplatz we saw someone with a Disney Store bag. Alert! There is a Disney Store here! We opened up Google Maps and found our way to the Disney Store. Home! It was fun to see some things from the parks in the store, as well as familiar items and logos in a different language.

Now, we were ready to head back to the hotel, which means we were going to get ready to set off on the next chapter of our adventure, the Neuschwanstein Castle.

Us after a day spent wandering Munich!

Munich was a lot of fun, and we probably should have planned more time here, perhaps one day in Nuremberg and two in Munich. But, we were able to get everything in and enjoy a true German Beer Hall dinner, so we were happy!

2 thoughts on “History, Beer, and Churches – A Perfect Day in Munich”