Now that you know we had an unexpected two days in Texas, I’ll fill you in on what we did during those two days. The first thing I thought of was seeing “the grassy knoll” then I thought of seeing Southfork Ranch.

The first place we visited was Dealy Plaza, where JFK was assasinated.

If you showed up here without knowing what happened here you would think this was a normal intersection, except for all of the people walking around with cameras, and the “X”s on the road.

I never really got over the morbidity of the “X”s. There are two there, one to indicate where the shooting started, and one to indicate where it ended. People lined up to get their photos taken on the “X”s when the lights were red and no cars were racing through the intersection. That was just weird to me.

You can see the Grassy Knoll where it was first thought the shots came from, as well as the white structure where the Zapruder film was shot from. And, of course you can see the Book Depository.

The Book Depository is now a museum, The Sixth Floor Museum. You don’t learn a lot of new things in the museum since this topic has been covered in so many movies, TV shows, documentaries, and books. But you do get to get close to “the window”. It is blocked off with glass and has a bunch of boxes set up just as they were found on that fateful day.

When you look at this and then out the neighboring window today you, well at least I, thought “no way” was it possible for there to be one shooter from this window. What my husband, and dad via text, had to remind me was this happened over 50 years ago and the trees I can see now would have been much smaller. 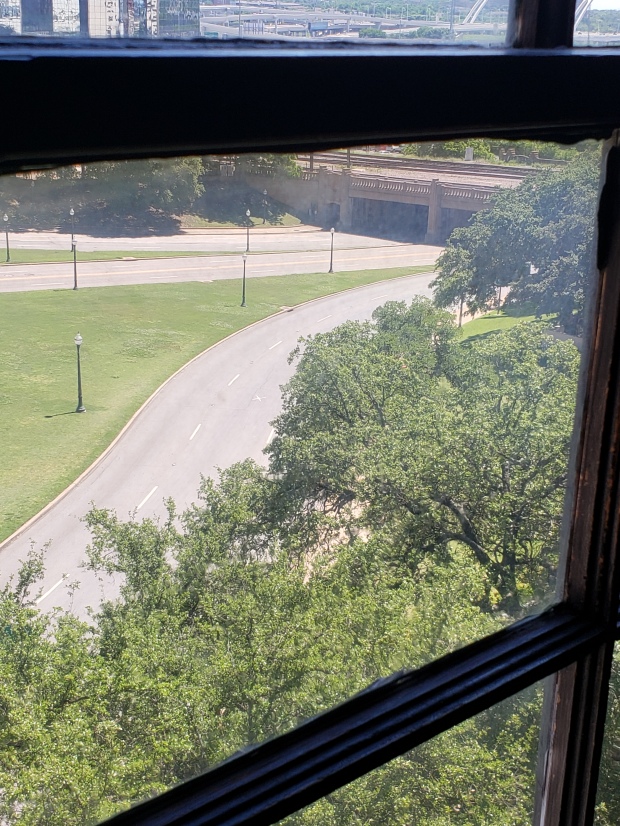 The view from the neighboring window, you can see one “X” in the road where the shooting stopped

They have the FBI model of the plaza on the day of the shooting. The museum also takes some time to highlight nine, of what I am sure are many more, conspiracy theories still circulating today around this event. We don’t know where we stand on this, but it was a very interesting museum to explore.

I’m an 80’s kid. I’m an 80’s kid from America who spent most of the 80’s growing up in England. I loved anything and everything American — it represented home to a sometimes homesick kid. One thing that was American and certainly represented the 80’s was the TV show Dallas. My dad, brother (the alien), and I would watch Dallas every Wednesday night on one of the two BBC channels in England. If I was spending anytime in Dallas I was certainly going to see Southfork.

I was watching the GPS and knew we had to turn right on a road and Southfork would be down that road. As we approached the road I startled my husband with my excitement — I could see the iconic Southfork gate! OMG!!!! I was seeing Southfork IN REAL LIFE!!! What more could a kid of the 80’s ask to see!!!! After I (kind of — not really) calmed down, we stopped long enough for me to get photos of Southfork. Doesn’t it look just like it did on TV? I still can’t believe I saw it!

Fun fact — when we were driving into Dallas earlier in the day I recognized some of the buildings from the Dallas opening scenes and hummed the theme song to my  husband (who started to think I was the strange one in the family, not my brother).

Our last sight in Dallas proved everything is bigger in Dallas. We stopped at AT&T Stadium much to my husband’s dismay. My husband is a native Philadelphian. Philadelphia Eagles fans hate the Dallas Cowboys. At first he wouldn’t even get out of the car.

After I coaxed him out of the car and into the gift shop I found out there were tours of the stadium. I grew up in a family where when we traveled we toured everywhere — cities, museums, sites, walking tours, brewery tours, factory tours, distillery tours, and yes, even stadium tours. You name it, if there was some sort of tour to take we took it. My genes kicked in and I just had to tour this massive stadium. Again, my usually not a football fan husband became the most stubborn Eagles fan I ever came across. I even said I’d do the tour on my own and he could sit in the car and sing the Eagles fight song to himself. Finally, he was coaxed into going on the tour. And it was awesome.

This stadium is impressive. It is giant. We stood on the field. I have been lucky enough to stand on Penn State’s field during a half time show with 107,000 of my friends cheering. I can’t imagine what it is like to walk onto this field during a game. I was duly impressed. My husband tried hard not to be impressed (he wouldn’t even let me take pictures of him in the stadium, so there’s no evidence he was even in the building).

The only thing that got to me was the locker rooms. We were proudly told by several people about the wood used in the players’ locker room. It’s some rare wood nicknamed the “wood of the gods” and each locker cost thousands of dollars. It’s impressive, until you go in the cheerleaders’ locker room.

When you walk in the Cheerleaders’ locker room, and you see laminate. Yep, cheap laminate. The same laminate used in the visitors’ locker room. Come on Jerry Jones — import that fancy wood for the ladies too, I’m fairly certain you can afford it. 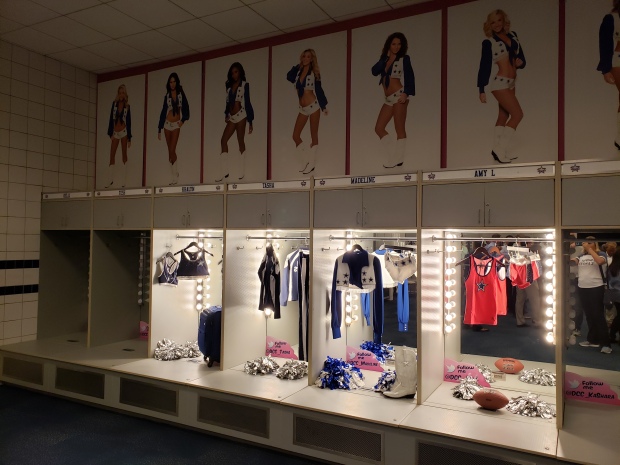 That’s our jam packed time in Dallas, but that isn’t all. We also went to the Disney of Texas — Magnolia Silos in Waco, Texas. That experience is worthy of it’s own post! Stay tuned!

3 thoughts on “Our Jam-Packed Two Days in Dallas”