I remember my grandparents had a set of glasses that said “When life gives you lemons make lemonade”. As a kid I didn’t understand how profound that statement can be. The 10 year old me thought it was a pretty simple concept – what else would you do with lemons after all?

Life sure handed us a bunch of lemons last week.

The company my husband works for is headquartered in Michigan and was celebrating their 25th anniversary with a dinner and other events for employees and their spouses. My husband arrived a day before me for meetings. On the night I was arriving he had a chicken sandwich and salad at the hotel restaurant before coming to the airport to pick me up.

The next morning as I was relaxing in the hotel my husband called me and said his stomach was upset and he had visited the restroom several times. I told him to come back to the hotel and try to sleep it off. I instantly thought this had to be the horrid Norovirus, as I had unfortunately suffered from this seven years ago. I figured he got it from the breakfast buffet that morning. I had ordered off the menu so did not eat off the buffet and was hopefully in the clear.

There was no way I was ever getting that Norovirus again, so I slept on the couch in our room with my husband in the bed. We were both up pretty much all night – at 1am I was well and truly up with a migraine and by then my husband was well acquainted with the restroom. At 4am I knew there was no way we were going to be able to fly home that morning. I made the decision to pack it in and drive home.

We were 1301 miles from home, about a 20 hour road trip. I was familiar with most of the route since I went to school in Indiana, and growing up in Ohio had driven south through Kentucky and Tennessee before.

At 5am we were off on our odyssey. At 8am we were in Peru, Indiana. I let my parents know what we were doing and where we were. With the benefit of Google my dad was able to quickly identify my husband’s conditions as those consistent with Salmonella and told us the symptoms generally lasted for 24-48 hours. With that news my husband admitted the chicken sandwich didn’t taste right when he was eating it.  My dad also told us about the BRAT (Bananas, Rice, Applesauce, Toast) diet for these situations. 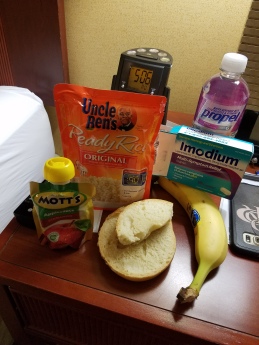 While I was Wandering – When Life Gives You Lemons

We stopped at a Wal-Mart outside Indianapolis and I bought items that fit the BRAT diet as well as a pillow and blanket for myself.  I power napped in the parking lot, then hit the road again.

At a gas station in Kentucky I decided we would make it just south of Nashville as I was getting pretty tired and was the sole driver.

After 11 hours of driving and getting south of Nashville I dropped my husband off at the hotel and was off to find dinner. Turns out we were staying in a retail mecca. I found a mall with a Target and got all kinds of supplies – including a huge can of Lysol for the car! I wasn’t taking any chances on a virus getting to me!  I then found a Panera and got toast for my sick husband and a sandwich for myself.

The next morning my husband was so much better. We were off for another long day of driving. After lunch south of Atlanta in Macon, GA I let my husband take the wheel while I slept for two hours.  What a luxury to have a second driver! 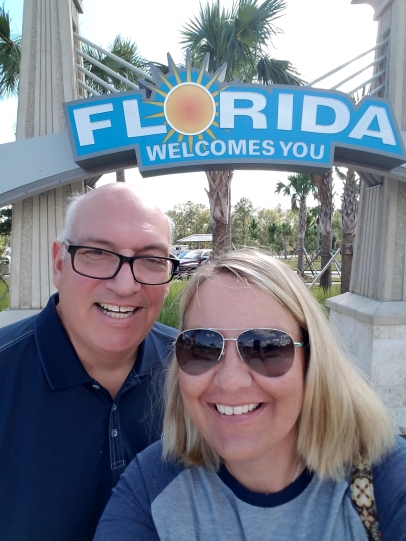 While I was Wandering – Happy to be Home

Finally – we crossed into Florida. Now anyone who has driven to Florida and is bound for anywhere south of Orlando knows what I am going to say. You experience this sheer joy at finally making it to Florida with sunshine, palm trees and free orange juice at the welcome center after driving through five states and leaving 30° weather for 80° weather. Then the let down comes as you leave the welcome center and you realize Florida is a really long state! We had five more hours to go until we were home.  That is almost half our driving time for the 12 hour day.

We finally pulled in to the Tampa Airport parking lot (remember we had flown up – so our car was at the airport and we had to return the rental we got in Michigan and kept all weekend), transferred all our bags, pillows, blankets, food, and more into our car.

This was the end of two long days and we wanted dinner. We had dinner at the new Hard Rock Café in the Tampa Airport and toasted to almost being home. Then we watched the unfortunate fourth quarter of the PSU vs OSU football game.

At 8pm we pulled into our garage. The end of our second 12 hour day. We quickly unpacked and were in bed by 9pm.

So, yeah we were handed lemons – a lot of them.

We could have been miserable and stayed in Michigan, gone through the stress of changing flights, extending hotel nights (and getting a new room since ours needed cleaning), and then not been home until Sunday probably. Instead, we made lemonade:

Yes, my husband is all better. We have not had chicken since that fateful night and it is not on our menu for a while.  When my husband goes back to this company’s headquarters he most definitely will not stay at that hotel again and will avoid buffets in general as he travels.

I’m off to have a glass of lemonade and enjoy life.