When you think of iconic sights in France one of two places comes to mind – the Eiffel Tower and Mont Saint-Michel. Staying in Honfleur, we were about a two and a half hour drive to Mont Saint-Michel. All of a sudden as we are driving my husband looks over and says “there it is!” – and it does just that – looks like it was just plopped there in front of you rising out of the water. It is an amazing sight to see.

We parked in the parking area off-the island. Very few people can park on the island. Getting there from the parking lot is part of the fun anyway. We had three choices – a free bus, walk the causeway or take a horse buggy. We chose the more romantic horse buggy, this does cost €5-6. It is well worth the small price. We slowly made our way across the causeway watching the Abbey get larger and larger.

Once off the buggy we walked into the village and made our first stop at the coffee stand. Unless you really need the caffeine hit we don’t recommend doing this again. You are paying €5-6 for a Nespresso shot. We have a Nespresso machine and know the pods are 75 cents or so. This is the cost of doing business on an island.

We live in Florida – Florida is a very flat state. Houses are generally one floor – there are very few steps in our lives in Florida. We faced the many steps of Mont Saint-Michel with dread! We made it up into the Abbey and followed the tour guide they gave us. We passed on the audio guides here, which turned out to be for the best since they are doing restorations and updates to the Abbey, some portions of the Abbey were closed. We were disappointed to learn that the picturesque Cloisters were closed when we were there.

As we wandered through the Abbey we could not help but marvel at the fact that it even exists.  We know what it takes to build a building today. To think this building was built in the 8th century is amazing. It is so imposing and solid. Watching them fly supplies in with a helicopter for the restoration boggles the mind as to how they built the Abbey in the first place. It is a true monument to faith. 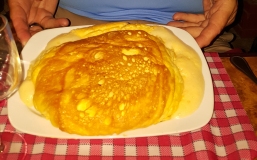 While I was Wandering: Mont Saint Michel Omelet

When complete we exited through the mandatory gift shop and made our way down through the village (much easier for us Floridians than going up). We stopped at a bistro to savor one of the fluffy omelets. When it was served to us it was so fluffy and overflowing on the plate. As we ate the omelet it was light and filling. A perfect lunch on a damp day.

As we left the island we had four choices to get back to the parking lot – the bus, horse buggy, walking the causeway or because the tide was out walking across the mudflats.  As appealing as the walk across the mudflats was to us to have the same experience pilgrims had many centuries years ago we chose the horse buggy again since it was a windy, damp day. We didn’t want to risk getting cold, wet feet and a cold on our vacation. If it had been a sunny day I am sure we would have picked the walk!